If you’re just getting started shooting portraits in a studio this is the video for you. Mark demonstrates five simple lighting setups using low cost gear. It’s perfect for the beginner.

Digital Photography 1 on 1, Tips and Tricks September 11, 2011 No comments

Mark answers several questions about street photography, with urban street portraiture as a focus. Watch as Mark walks through the process of capturing images while out and about in the city.

Mark explains how to get outside and shoot a self-assignment in order to expand your photographic skills. He gives himself two assignments and spends an hour taking pictures and SEEING things that most people would just walk by.

I know, it’s been a while since we last updated the blog. We’ve been busy creating lots and lots of content for AdoramaTV. We’ve created 44 new videos. Ten of those have been new Digital Photography One on One episodes. We’ve been getting a lot of feedback and we’re working hard to keep the videos fresh and useful.

Last week we released Episode 20: On Location Flash and have seen more activity on this episode than most, so I thought I’d post it here as well as a few of the photos we shot for the video.

Model Katherine Lee. In this shot I overexposed the background and used a medium softbox to add some fill light on Katherine. 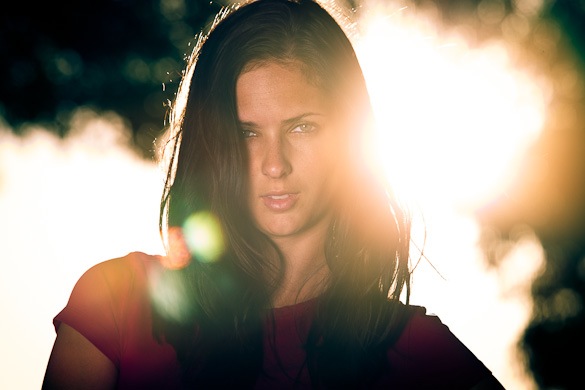 This image was shot using strong backlight. I used the softbox to balance the light. I adjusted colors in Lightroom before exporting.

This is an example of a balanced fill flash. Katherine was standing in the shade and without the fill flash she would have been almost completely underexposed. By matching the flash exposure to the ambient light I was able to create an image that looks like 100% natural light event though I used a flash.

In this episode Mark recommends a few camera bags.

The latest episode of DP 1on1 is finally here.  In this episode Mark shows you how to use your Sekonic light meter to balance flash and ambient light. More are on the way soon!

In this episode I explain how the shutter works, shutter sync, and how to control the ambient light exposure while using a flash.