Late last year I got an e-mail asking if I wanted to play with a super secret PocketWizard toy. I’m a huge PocketWizard fan and so of course I said, “bring it on!” In January I was given a couple of MiniTT1 and FlexTT5’s to play with.

I’m an avid PocketWizard user, I’ve even created videos about them. I’m also a long time Canon shooter. So when the new toys arrived it was almost as good as Christmas. I hired a model for a day and hit the street. 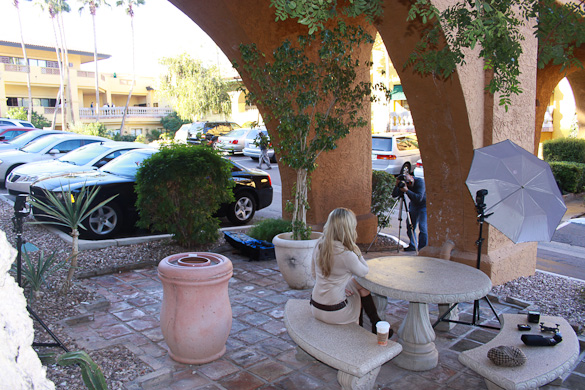 The first thing I tried was shooting with my flash “hidden” from my camera. In the first setup there was an umbrella and a column between the flash and camera. I had a MiniTT1 on the camera and a FlexTT5 on the flash. This challenge was so simple that I think the PocketWizards actually laughed at me. “Is that all ya got??” The system executed flawlessly. 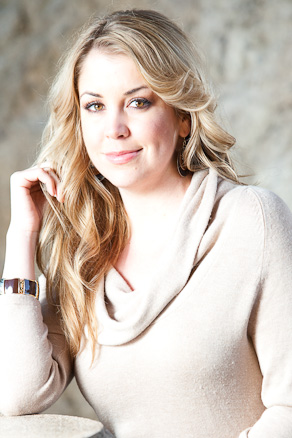 To really try some groovy tests I slid a Canon ST-E2 on top of the MiniTT1. I added another flash to the mix and was very happy to see that I could adjust the lighting ratios with the ST-E2 just like it was operating normally. The PocketWizards are essentially invisible to the system. Spectacular! It’s the best of both worlds. The ease of use of the Canon system we all know and love and the security of a radio trigger from the best in the business.

Ok, so now I knew the system could see through walls, worked flawlessly with the Canon gear I already owned, and was smaller than the other PocketWizards I had in my bag. Now it was time for some more difficult tests. 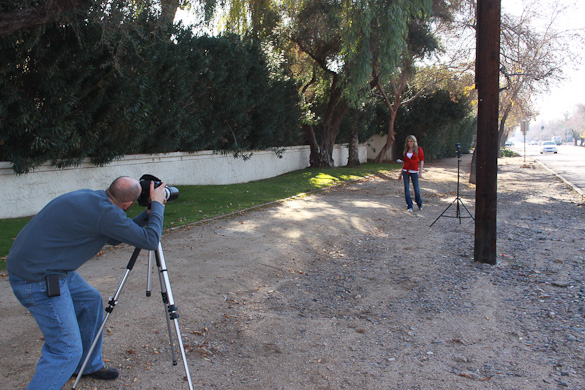 The next tests were designed to see if I could shoot at a distance and in bright sunlight. Here in Phoenix the sun can be a major challenge. We rarely see clouds in the sky. This bright sunlight can really destroy a line-of-sight system. The sun just washes out the signals from the transmitter. The first test was moderately easy. I shot in the shade at a distance of about 20 feet from the flash. Not a problem at all. 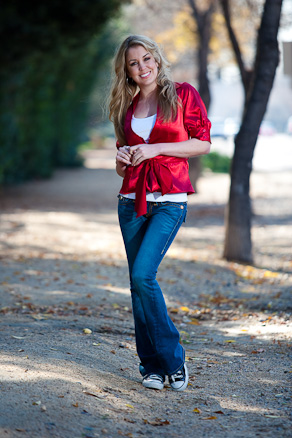 My model, Sarah Coggin, smiles as I shoot away.

The moderate light and distance test was easy for the PW system. We decided to put the system to the ultimate test – direct Phoenix sunlight. We headed to Papago Park and shot in nasty 2:00 direct sunlight. This light was brutal; a true line-of-sight killer. 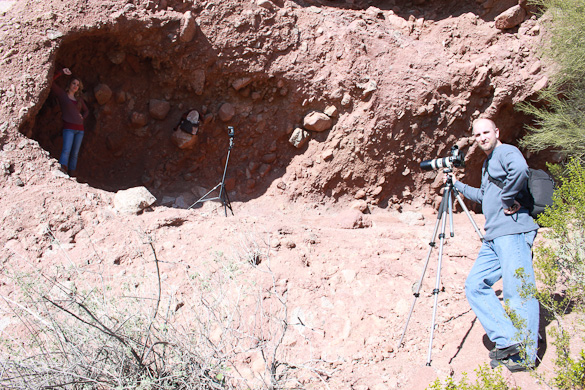 Yeah, we were melting.

We shot a few tests in this location. I really wanted to see how the system would hold up shooting in a rugged area. Again, I had no issues. The flash behaved just as if it were sitting on top of my camera. I could adjust flash exposure compensation, turn the flash on and off, and do anything I wanted all from a distance from the flash. 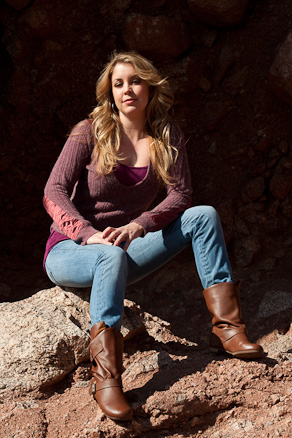 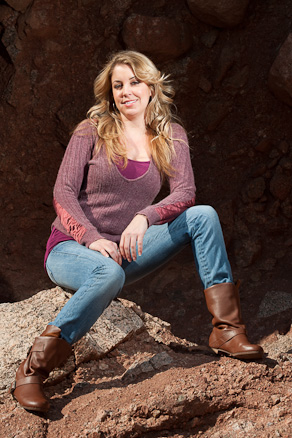 The new PocketWizards had passed the field tests with flying colors. The following day I did a few tests in the studio just to see if they would feel at home. 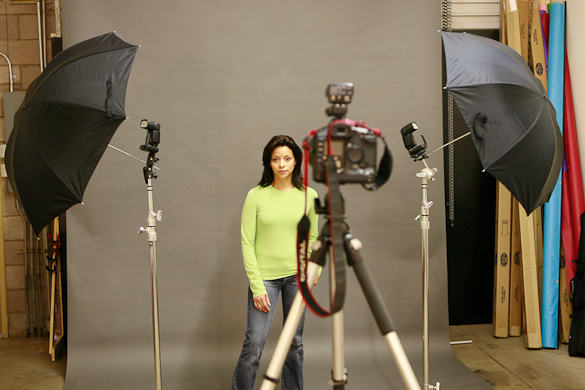 A couple of Canon 430’s with FlexTT5 units. On Camera: MiniTT1 and Canon ST-E2

In the studio the units continued to behave as expected. By mounting a ST-E2 to the top of the MiniTT1 on my camera I was able to control light ratios right at my camera. I did a quick technical test: shoot, adjust, shoot. Repeat. Using the ST-E2 this was a breeze.

Shifting light from left to right – all from my camera.

The last test was to shoot as the sun was going down. I wanted to see if the TTL would behave as expected with quickly changing lighting conditions. My model and I drove down the road to a local park and I shot almost directly into the sun allowing the flash to fill her face.

Again, the PocketWizards behaved just fine and we were able to grab a few great shots before we lost our light. 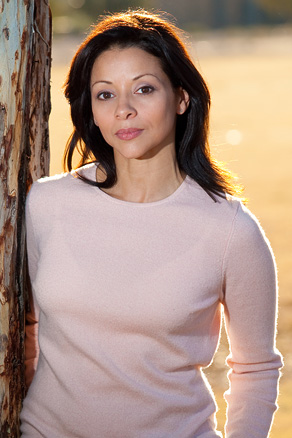 While I had my test units I tried a few other things. Will they trigger a PocketWizard Plus or Plus II? Yes, they are fully compatible. Will they trigger your Profoto equipment with the PocketWizard built in? Absolutely. Are they small and easy to pack? Yes. Can you buy replacement CR2354 batteries at Walgreens? I did, however David Hobby found them a bit harder to find than I did. I guess my Walgreens rocks.

Speaking of batteries you’ll need to keep them fresh in your flash units. The TTL accuracy declines as battery power declines. For best results use an external battery pack. I use Quantum Turbo packs.

Another feature that’s really amazing is the ability to upgrade and tweak the units via a normal USB interface and the PocketWizard Utility software (included in the box). As new cameras are rolled out and things are improved you simply plug your PW into your laptop and do a quick upgrade. How cool is that?

RF noise emitted by the 430EX, 580EX and 580EX II flash units limits the reception range of FlexTT5 to approximately 50 feet when flash is normally mounted. Reception can be increased using steps described in the Instruction manual. It can be greatly improved by separating the flash from the FlexTT5 by using the Canon OC-E3 cord.

Hopefully newer versions of the units will eliminate this issue altogether.

A few other folks had the opportunity to play with these units prior to public release. Please take some time and read what they had to say as well:

If you’re a Canon shooter and a strobist this is a no-brainer. The MiniTT1 (for your camera) and the FlexTT5 (for your flashes) just makes sense. They are compatible with other PocketWizards and are small enough to throw in just about any camera bag.

If you’re a Nikon shooter be patient. Although I’ve not been given any information I’ll take a wild guess and say that a Nikon version has to be coming in the future. How soon? I have no idea, but I do know PocketWizard is always eager to be the best in every market.

If you’re a studio shooter, like me, who primarily shoots with studio strobes and an existing PocketWizard set up I think the MiniTT1 is a perfect choice. It has such a small profile that you’ll forget it’s on your camera. Chase Jarvis had some interesting thoughts on this subject.

For all the details and specs on the products check out the PocketWizard site:

And finally, here’s a groovy video to play us out.